One of the strengths of the initiative of the Blue Shield is that although it is principally oriented toward the protection of cultural property in the event of armed conflict it does have an important role in mitigating and managing disasters …. I think that’s one of the aspects that makes it a truly international initiative and of universal appeal…. In moments of natural disaster the same need for cooperation exists and such cooperation results in the same benefits. – George McKenzie, Founder –

OUR ANNIVERSARY  — What is the Blue Shield?
25 years ago, four international heritage organisations recognised the need for greater cooperation to protect cultural heritage at risk from conflict and disaster: the International Council on Archives (ICA), the International Council of Museums (ICOM), the International Council on Monuments and Sites (ICOMOS) and the International Federation of Library Associations and Institutions (IFLA). Together, on 6 June in 1996, they founded the
International Committee of the Blue Shield, with a vision for national committees across the world. Today simply called the Blue Shield, it is:
“committed to the protection of the world’s cultural property, and is concerned with the protection of cultural and natural heritage, tangible and intangible, in the event of armed conflict, natural- or human-made disaster.” (Articles of Association 2.1 2016)
Often referred to as the cultural equivalent of the Red Cross, the Blue Shield is a non-governmental, non-profit, international organisation, working to protect museums, galleries, monuments, archaeological sites, archives, libraries and audio-visual material, and significant natural areas, as well as intangible heritage. It is composed of national committees operating across the world, coordinated by an International Board. Members include the founding organisations, governments, emergency services, armed forces, academics, and all those with responsibility for heritage protection in crisis.
We found our work in key international frameworks and law, such as the Sustainable Development Goals, the Sendai Framework for Disaster Risk Reduction, and in particular the 1954 Hague Convention for the Protection of Cultural Property in the Event of Armed Conflict, which designates our namesake – the distinctive blue shield emblem signifying cultural property protected in conflict. This landmark legislation was followed in 1999 by a Second Protocol, which recognises the Blue Shield as an official advisory body to the international Committee
for the Protection of Cultural Property in the Event of Armed Conflict (article 27.3).
This year we are celebrating our 25th anniversary. Blue Shield has 28 national committees and more beginning to be established. However, we are an almost entirely voluntary, including the National Committee members.  Blue Shield International is a largely unfunded organisation, supported primarily by Newcastle University in the UK. Despite that, we continue to grow. We have signed key agreements with the ICRC, NATO, and others, and are advocating for heritage protection at national and international levels.  As heritage continues to be threatened by crises around the world, the Blue Shield stands ready to assist.

Blue Shield Australia, established in 2005, is proud to be a long-standing ongoing National Committee of Blue Shield.  Thank you to all the volunteers who have contributed these past 25 years. 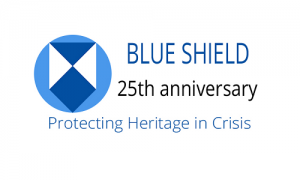