Abstract
On-site tours of post-disaster areas can deepen conceptual understanding of risks in a disaster environment. This evaluation describes highlights of a three-week program in Japan for Australian students of disaster psychology to study disaster mitigation and management in a different cultural setting. Students visited northeastern areas of Japan affected by the Great East Japan Earthquake of 11 March 2011, and centres for learning and memorialisation (the process of preserving memories of people or events) in Tokyo. This visit allowed students to meet experts in disaster risk reduction and recovery and allowed observation of how theory and practice in these areas have been developed in Japan.

The 8TH INTERNATIONAL CONFERENCE ON BUILDING RESILIENCE is to be held in Lisbon, November 7-9, 2018.

The theme is Risk and Resilience in Practice: Vulnerabilities, Displaced People, Local Communities and Heritages.

The conference is structured around the four priorities for action set out in the Sendai Framework and provides an opportunity for discussion of heritage in the broader context of disaster risk reduction and resilience, as well as to present evidence based heritage case studies.

ICOMOS-ICORP is an associate partner of the conference, along with UNISDR and a number of universities and research centres from around the world that specialise in resilience and disaster and emergency management. There is a broad range of tracks proposed for the conference which are aligned with the four priorities for action set out in the Sendai Framework for Disaster Risk Reduction:

Several of the tracks are expressly related to heritage, although, as heritage is part of the main theme for the conference, it would also be possible to address heritage within the other tracks on offer, although heritage is not specifically mentioned in their title. For the full range of tracks, which include among other areas cultural landscapes and indigenous heritage, refer to the conference website: http://2018.buildresilience.org

The call for abstracts closes this Sunday, 4 March 2018.

Cultural heritage is increasingly exposed to disasters caused by natural and human induced hazards such as earthquakes, floods, fires, typhoons, theft, terrorism etc. Recent examples include Earthquakes in Central Mexico in 2017, Central Italy and Myanmar in 2016, Nepal earthquake in 2015, UK floods in 2015, Balkan floods in 2014 and ongoing conflicts in Syria and Yemen. These disasters not only effect the immovable heritage components such as monuments, archaeological sites and historic urban areas but also cause damage to the movable components that include museum collections and heritage objects that are in active use such as religious and other artefacts of significance to the local community. Both these movable and immovable components are exposed to various hazards that necessitate appropriate measures to reduce disaster risks. Also in the aftermath of a disaster many architectural fragments of damaged or collapsed buildings need documentation, handling and storage similar to movable heritage collections. Therefore an integrated approach for movable and immovable heritage is needed for risk assessment of heritage sites as well as museums and its collections before, during and after a disaster situation. Limited availability of human and financial resources also calls for closer coordination between professionals and institutions dealing with heritage sites, museums and the external agencies. Moreover integrated disaster risk management involves appropriate mitigation and adaptation strategies to reduce various risks to movable and immovable heritage components by taking into consideration their heritage values that are often interdependent. It is also important to recognize many examples of traditional knowledge evolved by communities through series of trials and errors that demonstrate that movable and immovable cultural heritage can be an effective source of resilience against disaster risks and integrate these in larger disaster risk management strategies.

Japan is home to a variety of frequently occurring disasters, which can cause wide-ranging damage to its cultural resources. For this reason, the country has taken specialized measures in establishing a disaster risk management system and methodology for post-disaster emergency response and recovery.

Together with the preservation of historical townscapes and buildings, we aim to protect the objects and implements long used in the daily lives of people of the region, as well as objects that serve as clues to understanding the lives and achievements of past generations. For this reason, we consider both movable and immovable cultural property to be essential subjects of our disaster risk management efforts.

Seasonal festivals and rituals as well as local celebrations and customs also help to make people’s lives more abundant in the local community. Thus, another significant task is the safeguarding of intangible cultural heritage from natural hazards.

These various cultural heritage disaster mitigation measures, many developed in response to Japan’s special circumstances, will be covered in this training.

The 13th International Training Course will give special focus on the Integrated Protection of Immovable and Movable Cultural Heritage from Disasters.

See http://r-dmuch.jp/en/project/itc_2018.html for Guidelines for Application, Application Form and further information about the course.

Read UNESCO’s recent publication on their response to protect culture in crises, current challenges, the importance of culture in emergency situations and human rights.

“Culture implies more than just monuments and stones – culture defines who we are. it carries universal values and the many faces of our shared humanity….Protecting culture and heritage means protecting people. That is what UNESCO stands for.” – Irina Bokova, Director-General of UNESCO 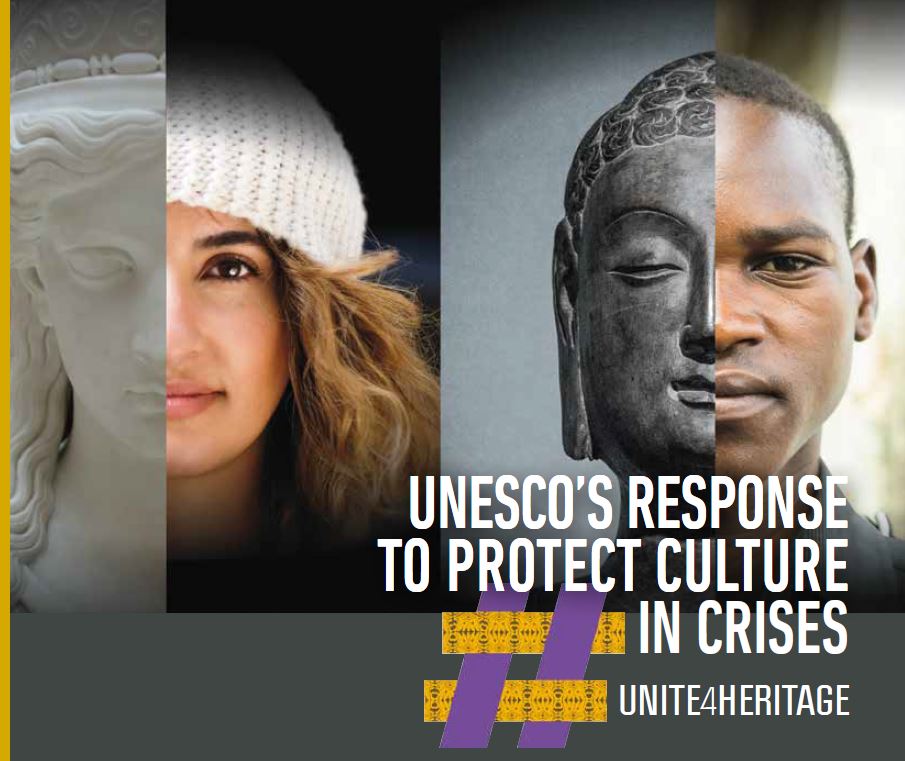 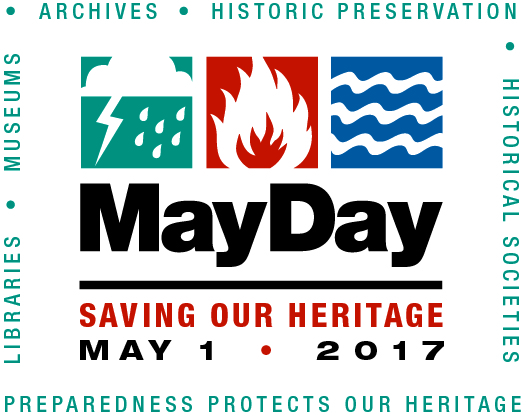 Protecting our heritage is a fundamental responsibility for galleries, libraries, archivists and museums.

Over the next few days and weeks we will share some tips about how you can help protect our heritage today and everyday.

Deakin University has joined FutureLearn, one of the first large cloud learning platforms offering open free courses. Deakin’s first course on Disaster Management, associated with the discipline of Humanitarian Assistance, is now open for enrolments at: 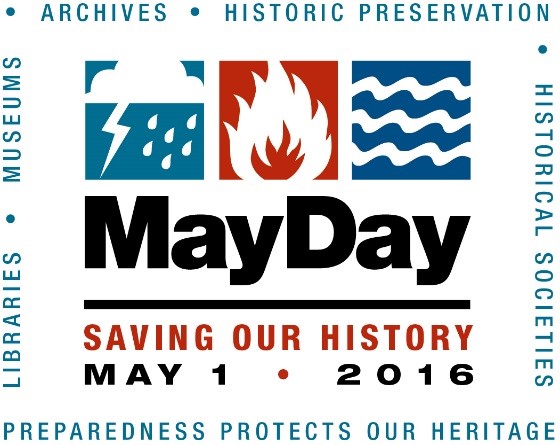 Every May Blue Shield Australia encourages cultural organisations to think about ways that they can be better prepared for disaster. MayDay for cultural heritage fuses two concepts – the distress signal, and the month of May – in order to create a memorable calendar date for events that improve disaster preparedness in archives, galleries, libraries and museums.

Download the flyers and logos at the bottom of this post and use them to start the conversation in your organisation.

Other things that your organisation could do include:

Blue Shield Australia MayDay 2016 How will you celebrate

A cutting edge approach for the delivery of emergency management education, training and professional development was officially launched in Brisbane on the 18th November.

The Australian Institute for Disaster Resilience will deliver contemporary products and services around the country that have been developed by, and for, the emergency management sector.

The Institute is a partnership that brings together the great depth of experience of the Australasian Fire and Emergency Services Authorities Council, the Australian Red Cross, the Bushfire and Natural Hazards Cooperative Research Centre and the Attorney-General’s Department.

Further information regarding the Institute and the products and services it will deliver will be available at www.ag.gov.au and www.afac.com.au.

MEDIA RELEASE: 13 October marked the International Day for Disaster Risk Reduction – a day to acknowledge the efforts of communities to reduce their exposure to natural disasters.

This year’s theme ‘knowledge for life’ focuses on the use of traditional, indigenous and local knowledge to complement science in disaster risk management.

With 19.3 million people displaced by disasters globally in 2014 it is vital that every citizen and government plays their part in building more disaster resilient communities and nations.

The Australian Government recognises that Indigenous peoples provide an important contribution to disaster risk reduction through their experience and traditional knowledge.

This is on top of a $150,000 commitment to review the Keeping Our Mob Safe strategy, which provides a framework for coordinated and cooperative approaches to emergency management in remote Indigenous communities. The review will ensure that the strategy remains up-to-date and continues to meets the needs of Indigenous communities.

Engaging local communities and indigenous peoples is also a key principle of the United Nation’s Sendai Framework for Disaster Risk Reduction 2015-2030, which aims to reduce disaster risk and losses in lives, livelihoods and health.

The International Day for Disaster Reduction started in 1989 following approval by the United Nations General Assembly. The UN General Assembly sees the IDDR as a way to promote a global culture of disaster reduction, including disaster prevention, mitigation and preparedness.

Further information on International Day for Disaster Reduction can be found here: http://www.unisdr.org/we/campaign/iddr

Further information on the Australian Government’s programs and policies aimed at strengthening disaster resilience can be found here: http://www.ag.gov.au/EmergencyManagement/Pages/default.aspx

Amitabh Joshi, a Nepali filmmaker based in new York, travelled to Nepal in the aftermath of April’s devastating earthquake to document the recovery.

In the process he made these short documentary films about the local artisans restoring the country’s invaluable built heritage.